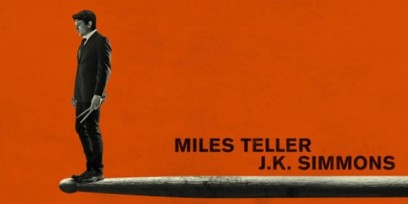 A promising young drummer (Miles Teller) enrols at a cut-throat music conservatory where his dreams of greatness are mentored by an instructor (J.K. Simmons) who will stop at nothing to realise a student’s potential.

From the moment Whiplash opens, it’s energy is electrifying. Masterfully directed by Damien Chazelle (who is an absolute baby, by the way), Whiplash has quite a simple story but is absolutely brought alive by it’s editing and performances by actors Miles Teller and J.K. Simmons.

I must note that I am quite obsessed with J.K. Simmons. Ever since I saw him in Juno, I have made a conscious effort to see every film that he is in, not only because he is a remarkable performer, but also because he has great taste in scripts. He is the absolute king of supporting actors. Usually pitted in more comedic or melancholy roles, we get to see the Simmons play this incredibly menacing, wild character who seems to have no limits whatsoever. It’s really quite remarkable the things that this character says, one of my favourite being “Oh my dear God. Are you one of those single tear people? Do I look like a double fucking rainbow to you?”  I mean wow.

And then there’s Miles Teller. I’ve seen him in a few indie films as well as a couple of crappy comedies over the years. He worked so hard for this role, just to be cast in it. Watching his performance in Whiplash is really exciting, because he literally unfolds and blooms before our eyes (with the added bonus of blood, sweat and tears). Teller is definitely one to watch and will be the next so-and-so actor of the future, and this will have been the film that did it.

The way in which Whiplash is edited is astonishingly good. It’s almost like the jazz piece “Whiplash” itself. It’s quick, but not in a dizzying way. More timely (I’m trying not to use the work rhythmic, because I hate using it to describe editing) than anything as it does not rush or lag at all. There is not a moment in this film that would need trimming, because it would be like cutting a bar out of a song. It just wouldn’t fit together right. And most importantly, it pushes and builds so perfectly into a magnificent climax in the closing sequence.

I really, really loved this film. Whiplash is produced with my favourite kind of filmmaking – small budget, good script, great actors. The recipe to success.